Yama, is a Legendary sword that was added into the game with Update 15.

This sword has really fast attacks with decent damage making it a great sword in PvP, it looks similar and has near identical abilities to Tushita however the Tushita is a lot more fierce when it comes to PvP. 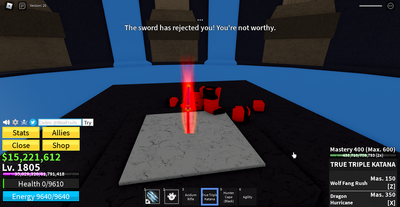 Note: This sword has good combo potential, decent damage, and is quite easy to use, although it still requires aiming and timing skills, but easier than other swords with small hitbox (like Shisui, Rengoku,...). Still, it is not as easy to use as Dark Blade V2 and Pole V2.