Saber Expert is a Lv. 200 Boss that can only be fought after completing a puzzle to unlock the room he is in (as well as having to be Lv. 200). Here's a quick tutorial of how the puzzle can be solved.

The first step of the puzzle is activating all the green buttons in the two parts of the Jungle Island.

The first three green buttons are at the main, quest giver island. The other two are at the Gorilla King's island. After activating all five green tiles, go to the quest giver NPC house, right in the middle of the island above the lake and walk down the stairs.

Upon entry, you will see a hole in the floor (the hole is not accessible and visible for those who did not press all 5 buttons). Go down the hole, and you will see a poem on the wall with a torch on the side. Grab the torch and go to the Desert Island.

The poem reads: 'lands of sand, my home does stand. Now dark and grim, bring light within.'

It means:'In the desert, is where my home lies. It is dark inside, bring light into it.' (Bring light within is to tell you to take the torch.)

Once you reach the Desert, look for a collapsed house with a red door (it is the home mentioned in the poem). Enter through the door and you will see a curtain. Equip your torch and stand still next to the curtain. It will burn it down and open to reveal a secret room.

Inside, you will see a wall with another poem and a cup at the side. Grab the cup and proceed to Frozen Village. (you can click on the cup or stand on the cup to equip)

The poem reads: "If power you seek, fill the cup from a leak. Left alone in the cold, is a story to be told".

Once you arrive at the Frozen Village, enter the cave in which you find the Ability Teacher (see image to right) In there, you will find a ice stalactite with drops of water falling down to the ground. Stand underneath it with the cup in your hand. It only needs one drop to fill.

Once the cup is filled, exit the cave and go to the top side of the village. In there, enter the house near the Sword Dealer of the East (see image to the left), and you will find the Sick Man inside. Talk to him, select "Help", and the dialogue "Thank you so much! Please meet up with my son, I'm sure he will reward you." will trigger.

After being thanked, go to Pirate Village

Go to the Pirate Village. Once you reach there, find the Rich Man and talk to him. The dialogue "Thanks for helping my father, but a mob leader has stolen all my money! Please find and take him down as soon possible so I can reward you..." will trigger, and you'll be tasked with killing the Mob Leader.

He can be found at an island to the north of the Pirate Village. 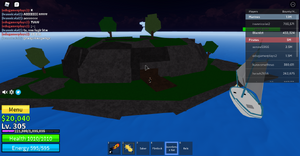 Once you defeat him, go back and talk to the Rich Man. He will say:

"Thank you for getting my money back, you can keep this ancient relic as your reward."

You will now have a Relic in your item slot. Go back to the Jungle Island and prepare for a final battle. Find the stone building where Ciro ( blox fruits dealer's cousin) is located. Beside the stairs, you will see a relic-shaped hole in the wall. Just equip your ancient relic received from the rich man and plug it in, a door will open and Saber Expert will be inside (if he is not inside, someone probaly killed him already. Wait for a few minutes. He respawns every 30 minutes). 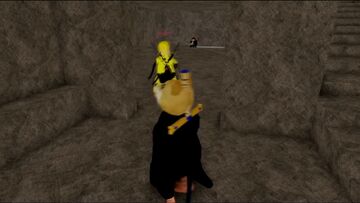 He is Level 200 and is quite a hard boss if you are Level 200, too. A strategy to kill him is staying outside the door since he can't leave and bombarding him with ranged attacks. Be careful though, as he can still use his own ranged attack. After you kill him, he will drop a legendary tier sword, Saber. After completing the quest, you will be able to buy Ken Haki from Usoap if you are Level 300.

You need to be at least level 200 to fight him or else you will get a message saying you aren't ready.

Don't worry if you die with the relic in your inventory as you can keep getting the relic from the Rich man, even if you leave the server.